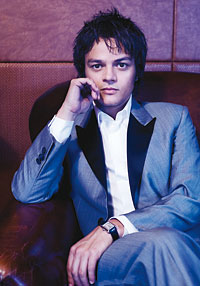 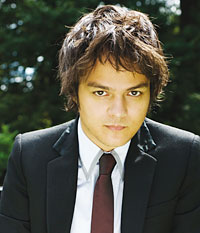 The 30-year-old pianist-vocalist combines the best of traditional jazz with the latest pop elements. He is even better live than on his best-selling albums. When it comes to showmanship and energy, Jamie Cullum is unbeatable.

For some he is the “Robbie Williams of jazz”, for others he is “the new Sinatra”, or even “the David Beckham of jazz”. Another gauge of his popularity is the fact that he just switched record companies as part of a multi-million deal. The product of amusical family, he began early on both piano and guitar. His love affair with jazz began when he found an Oscar Peterson LP in his parents’ record collection. After this discovery he devoted his energies to the piano.

Money earned during his early gigs was used to produce his first CD “Heard It All Before”, which sold 700 copies. His second CD, “Pointless Nostalgic”, was played on the radio. This led to a call from Prince Charles and an invitation to perform at Queen Elizabeth’s birthday celebration. His first CD for Universal, “Twenty Something”, went on to sell more than 600,000 copies in the UK. A star was born. He was soon playing with the likes of Burt Bachrach, Carole King, and even jazz lover and amateur pianist Clint Eastwood.

His latest album is called “The Pursuit” and comes after a four-year break. The wait was worth it with Cullum’s clever mix of jazz standards, hip dance floor tracks, and ballads. The young Briton performs with the Count Basie Big Band, as well as with the horn section from Michael Jackson’s “Thriller”. As good as his recordings are, seeing Jamie Cullum live is guaranteed to be an evening of energy, wittiness, and rare musical talent.

Sweet Billy Pilgrim are an English pop band, composed of bassist/banjo player Anthony Bishop, guitarist and songwriter Tim Elsenburg, and drummer/percussionist Alistair Hamer. Sweet Billy Pilgrim formed in 2003 after their previous band ‘Cordisto’ came to an end. The band are named after the main character in Kurt Vonnegut’s book Slaughterhouse 5.

As of 2009, they have gone on to release two albums.
“We Just Did What Happened and No One Came” was released in 2005 and awarded four stars by Mojo magazine, and The Sunday Times called it, “a rather special debut”, making the track “Stars Spill Out of Cups” one of their songs of the year.

“Twice Born Men” was released in 2009 and was awarded 5 stars and made CD of the Week by The Sunday Times, later that year it made The Sunday Times’ top 100 albums of 2009 list. The album was also awarded 4 stars by Mojo and Uncut, and was made a Mercury Prize album of the year for 2009.