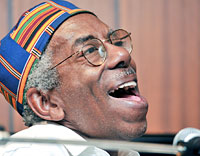 Jazz is an art form, which, when it takes itself seriously, boldly emerges from the here and now. Thus, this genre which is so rich in tradition is symbolic for our era of permanent change. Especially in times of economic recession, Jazz lends itself as master teacher for daily life, where more and more people must improvise. The many aspects of ‘busy surviving’, a credo lived by the protagonists of this art, can be exemplary these days, especially on the romping grounds of the entrepreneurs. Even in times of severe material privation or in close competitive situations thoroughbred Jazz musicians aspire to fully tap their potential, and strive for freedom, transcendence and detachment from all material things.

Paul Zauner, Trombonist, Promoter and Label-Founder from Diersbach in Upper-Austria is fully aware of this. As Curtis Mayfield would put it: Zauner always comes “in peace with a message of love”. Paul Zauner, who grew up in the borderland to Bavaria possesses an idealism which is cross-boarder. With his soft swinging music he criss-crosses the country, his famous PAO-Albums are sent across the entire globe. He himself is again and again drawn to Harlem and its mythical mists. There, the Upper-Austrian with a countrified background moves just as comfortably as the natives of Harlem. When he steps into the endearingly anarchistic St. Nick’s Pub on Sugar Hill, this last refuge of the old Spirit of Harlem, he is warmly and enthusiastically greeted. The clusters of musicians there know and love this out-of-the-ordinary guest. Pleasantries such as the advantages of hearty meals are exchanged as well as all sorts of subtle conversation about music, which maestros like Donald Smith and Mansur Scott place there weekly in the heart of Harlem. These two masters Paul invited to flavour the new Blue-Brass-CD “Soulful Change”.

Music is at its best when the actual structure is enhanced by poetry, mystic and individual expressions, when self-expression and perception merge seemingly without difficulty. This occurred in the 70s in the legendary band The Cosmic Echoes who were gathered around the famous pianist Lonnie Listion Smith. As their singer and flutist, Donald Smith played a central role. The musician from Richmond, Virginia left his hometown in the early 80s to go to New York and concentrated on his, until then somewhat neglected, piano playing. On these 88 keys Donald Smith created freer forms than the Space Funk of Brother Lonnie would have allowed. On Paul Zauner’s “Soulful Change” he shines in pieces like “In A Sentimental Mood” with lots of his very own cockiness and even more soulfulness.

Singer and percussionist Mansur Scott from the heart of Harlem is also full of this soulfulness. His youth, he spent mainly in such legendary venues like the Cotton Club and the Minton’s Playhouse. His affectionate adaptation of Monks “Round Midnight” is imbued with the ancient wisdom of Harlem. Scotts voice, which moves along the baritone levels, at times lures away from the euphoria poison to then draw you into the realms of personal promise. Soulful Change creates with all its high-culinary contributions from Clemens Salesny to Dusan Novakov, from peter Massink to Wolfram Derschmidt & Daniel Nösig, within its span between bliss and melancholia, between down-to-earthiness and poetry, moments of seldom beauty and magic.