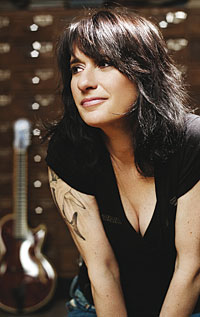 Térez Moncalm puts it succinctly: “I’m a jazz singer with a very ‘rock’ attitude.” Her new album, Connection, certainly confirms this; in addition to her own compositions, she sings Cole Porter and U2, My Baby Just Cares For Me and Charles Aznavour… She turns standards from both sides of the Atlantic to her advantage, writes songs falling between jazz club and rock venue, takes voluptuous delight equally in the word and the musical note, in the groove and the melody.

For the second time, after her album Voodoo three years ago, Térez is once again working with guitarist and pianist Michel Cusson (ex Uzeb) to produce this record, built on that very personal balance between her own compositions and covers (“I enjoy interpreting the songs of others as much as I do singing my own,” she declares), between the English and French languages, between the great classics and rediscovered rarities, between jazz vocal virtuosities and rock energy… With her uniquely recognizable husky voice she blends the great distinction of the jazz divas of the classic years with the fiery temperament of popular music’s most spectacular vocalists. Her pantheon of greats? “Nina Simone, Shirley Horn, Anita Baker, Annie Lenox, Sade…”

Perhaps we need to look into the childhood of this Quebecoise (who is in fact a descendent of the French General Montcalm who died defending the city of Quebec against the English) for the widely spreading roots of her eclectic tastes and diverse admirations. “I’m the youngest of five children,” says Térez. “There are 16 years between the eldest and me. So we had every kind of musical influence at home – Elvis, the Beatles, Jimi Hendrix, Frank Zappa, Jacques Brel, Edith Piaf, Serge Lama and the whole quebecois repertoire. But my father was a jazz enthusiast. He played me the music of Frank Sinatra, Nat King Cole, Tony Bennett, Ella Fitzgerald, Sarah Vaughan but I was exposed to other influences as well. I’d be very frustrated to be restricted to singing rock. I have to sing the jazz repertoire to be happy.”

But don’t be fooled by the myth: “My voice is that of a two packet-a-day girl, when in fact I’ve never smoked. My vocal cords are thicker than the average and when I was seven or eight they were always asking me if I had a sore throat because my voice was husky even at that early age.” So Térez Montcalm didn’t begin her career in a smoke-filled dive after all! Yet she earned her first wages as a singer at the age of twenty. She composed, played guitar and sang for theatre and dance companies for a number of years, all the while writing and singing her own compositions. She started recording at a relatively late stage; in 1994, at the age of thirty, her album Risque revealed her as an extraordinary interpreter. The critics piled up the comparisons: Tom Waits, Janis Joplin, Al Jarreau, Rickie Lee Jones among others. But she was already causing a stir with her covers, like her impassioned version of Charles Aznavour’s For Me Formidable.

She picks up Aznavour’s repertoire again in Connection with a cover of Je n’attendais que toi, set to a superb melody by Francis Lai. And she dares to venture into the sensual ecstasies of Léo Ferré’s C’est extra . Under the direction of Michel Cusson, she has sought to reproduce in the studio the intensity of her live performances, much more than musical experiences for her and her public. “After a concert, I feel open, liberated. Singing is a therapy.”