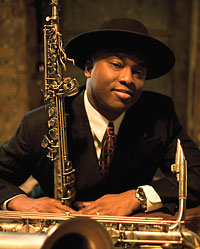 James Carter is back in town. One of the most admired saxophonists of his generation makes his Universal debut with Present Tense, an album of uncompromising, swinging jazz. While it’s music that has its roots in the jazz tradition, it’s also forward looking, “How else could it be, with players like Victor Lewis on drums, D.D. Jackson on piano and Dwight Adams on trumpet?” asks Carter.

The all-star cast, which also has James Genus on bass, includes guest appearances by Rodney Jones on guitar and Eli Fountain on percussion. The album is produced by Michael Cuscuna, who sensed a challenge to capture the sheer range of Carter’s enormous talent and his mastery of jazz idiom, which he felt had not really been adequately represented on earlier albums. “On going through James’s entire output prior to recording Present Tense it struck me that many of his albums were ingenious concepts,” he reflected. “As successful as each was, none of them captured the breadth of James’s mastery of this music.”

“When you see him live, he can reach for any decade in this music’s history as easily as he can reach for any reed sitting around him on the bandstand. We wanted to bring that to the fore on this album. So you’ve got one great artist with one superb band interpreting everything from Django Reinhardt and Victor Young to pieces James wrote. I think with this album you really get a sense of the totality of who he is.”

On Present Tense the real James Carter steps forward with a breathtaking album that demands you play it again and again. On what is surely an instant classic, his critically acclaimed virtuosity on flute, bass clarinet, soprano saxophone, tenor saxophone and baritone saxophone has never been better highlighted.

A powerful force in today’s jazz scene, James Carter’s playing is firmly rooted in 20th-century Afro-American culture. The sweep of his imagination and the power of his technique embraces the whole saxophone tradition in jazz which he has blasted into the future positive of the 21st century through his resolutely contemporary outlook, prompting Hi-Fi UK magazine to dub him a “Modern sax God”.

On what is a tour de force of inventive musicianship, Present Tense comprises ten exciting tracks including three originals penned by Carter himself, one of which came to him in dramatic circumstances. “’Sussa Nita’ came to me in a dream that I had,” he recalls. “Billie Holiday sang the first couple of phrases to me. It was in November ’05, in one of those sepia tone dreams. It was in an after hours club, and there was Billie Holiday and she gave me the first couple of phrases. I woke up, and I wrote them down! I let it lie for a while and when this project came up I sat down and finished Billie Holiday’s phrases to come up with ‘Sussa Nita.’”

Of his other two originals, Carter says, “’Bossa J.C.’ came out of a need to have something different on the album, and I can’t wait to perform it live. There’s a descending riff going through nine changes and the soloist can stop on any change and use that particular chord to groove on. It presents a whole other tonality as opposed to the changes which are presented at the beginning of the tune. ‘Bro. Dolphy’ I wrote for an earlier CD, but I didn’t use it then so now I’m grateful how things worked out, because the intimacy of this performance would have been lost had I used it earlier.”

The remaining titles come from jazz’s rich legacy and were picked by Carter and with producer Michael Cuscuna, but as Carter points out, “I’m very reverent to my past but I want to remix it and deal with the future.” One example of this forward looking approach is his version of “Song of Delilah,” “Jazz fans will know this was done by Clifford Brown, with Sonny Rollins on tenor saxophone, but I flipped it around and gave it a hip hop sensibility,” he says.

But if a piece lends itself to a straight-ahead treatment, Carter and his like-minded coterie of swingers delight in vibrating it with new meaning, as they do on the opening cut, a snappy version of “Rapid Shave”. “This was one of the first tunes Cuscuna brought to me. It was originally done by tenor sax legend Stanley Turrentine and since Stanley did it I said, ‘Forget about the tenor!’ and I decided to use baritone!” he laughs.

On “Shadowy Sands,” a composition by pianist Jimmy Jones, Carter demonstrates his musical versatility by turning to the bass clarinet. “It was very interesting to me because ‘Shadowy Sands’ was one of the few bona fide bass clarinet solos by Harry Carney, Duke Ellington’s famous baritone player who also played bass clarinet – in fact, there aren’t too many examples of him soloing on that instrument.”

On an album that covers a lot of musical ground, Present Tense also includes a laid back version of Dodo Marmarosa’s “Dodo’s Bounce” featuring Carter on flute, a flying version of Gigi Gryce’s “Hymn of the Orient,” where he turns once more to the baritone saxophone – “I wanted to feature that instrument a bit more on this album” – and a moving Django Reinhardt composition, “Pour Ma Vie Demeure,” where Carter shows his skills on soprano saxophone. “I first heard this on a radio broadcast from 1956 by one of Django’s rhythm guitarists, and I dug it straight away,” he says.

The album signs off with a haunting version of the old ballad “Tenderly,” with Carter’s baritone playing counterpoint to Dwight Adams’ Harmon muted statement of the familiar theme, “I asked my wife what ballad she wanted to me to do,” recalls Carter. “She came up with this song, which is a familiar piece folks can immediately align themselves with. When I played it for my Mom, she immediately went back to her formative years. She closed her eyes and I tried to converse with her as the music played and she waved me off – enough said, ‘That’s a keeper then!’”

Described as “One of the brightest stars in jazzdom” by the Detroit News, Present Tense opens a new chapter in James Carter’s career, which since his stunning debut on J.C. On the Set from 1993 (which first appeared in Japan before its Stateside release in 1995) has seen a string of critically acclaimed albums, a role in the motion picture Kansas City directed by Robert Altman and the world premiere in 2002 of Concerto for Saxophones written by Roberto Sierra with the Detroit Symphony Orchestra. A multiple Downbeat poll winner, in 2004 Carter received one of America’s highest cultural awards: The Dr. Alaine Locke Award, given annually to individuals who have provided exemplary service and leadership in the promotion of African American culture.

Carter has a variety of groups which he tours with extensively, including a traditional quartet, an electric group and an organ trio. He is a frequent visitor to Europe and can often be seen substituting in the World Saxophone Quartet.