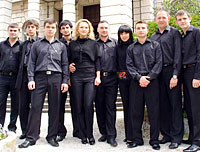 The ensemble “Concertino” was established in 2003. The main idea for formation of the ensemble was to revive the classic accordion in Moldova, because accordion had become popular with Moldovans as a people’s instrument. And the group, in its turn tries to show the large audience that the accordion can be used not only to play popular, but classical music as well.

One of the inspirers of the idea to form this group was Alexei Leahu, director of the travel agency “Mondi TUR”, who is called in the group the “father” of “Concertino”. The ensemble comprises students and graduates of the Music, Theater and Visual Art Academy from Chisinau – 7 accordion players, bass player, piano players and a percussionist.

In spite the fact that the ensemble “Concertino” is only 3 years old, the group has managed to make many solo concerts not only in prestigious halls of the capital, such as Organ Hall, Philharmonic Hall, Opera and Ballet Theater, National Palace, but also in the most remote regions of the country and travelled many time to European countries: Italy, Denmark, Germany, France, Austria, etc.