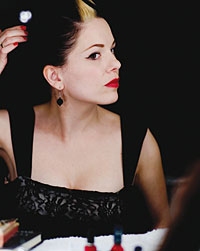 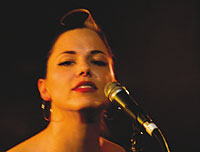 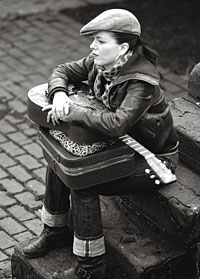 Dublin’s Imelda May is a unique sight to behold. She does not only look like she was just transported from the 1950s to the present. Her music is a delicate mixture of Rockabilly, Jazz, and the Blues, a combination which has earned her international attention.

Star BBC presenter Jools Holland has invited may to perform on his talk show on numerous occasions and has become a huge fan. May’s musical mentors are Billie Holiday, Dinah Washington, Aretha Franklin, and Wanda Jackson. Her debut album, “Love Tattoo”, won listeners over with its fresh-but-retro sound. A single from the album, “Johnny Got a Boom Boom” had widespread airplay in both Britain and Ireland. The newcomer soon became a star.

This simpatico singer with the blonde quaff will also make a guest appearance on the new Jeff Beck album. She also recently worked together with Eric Clapton and Jamie Cullum. At this year’s Grammy Awards she electrified the audience as one of the guest singers for the tribute to Les Paul. By the way, her favourite shade of lipstick is Mac Ruby Woo.