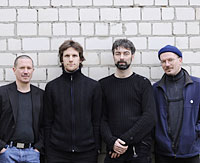 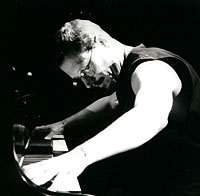 Chris Jarrett, son of a Slavic family, was born in 1956 in Allentown, PA and grew up in the woods of the Appalachians. He began to play the piano at the age of 13 and got lessons free of charge from the great Autrian pianist Vinzent Ruzicka. After finishing school he studied piano and music history at the Oberlin Conservatory in Ohio. Unhappy with the elitist attitude there and penniless, he started his wandering years.

He ended up in Europe. His carreer begins in 1985 in Oldenburg, Germany. There he dedicates himself again to music, converting his experiences of his youth and wandering years into music. During this time his first records (“Dance On The Volcano”, “Outcry”) as well as the ballet music “For Anne Frank” and his first symphonic work (“… Loves Me Not”) appear.

From 1988 to 1989 he teaches at the Carl-Von-Ossietzky University in Oldenburg, gets involved into more live performing and composes film music, such as “Happy End” (Dir. W. Pfeiffer), and the choreodrama “Long Play” for the National Theatre Subotica under Nada Kokotovic.

In summer 1996 he performs in Tunisia with the lute player Zin-El-Abidine in concerts and TV shows. These concerts result in the formation of the international group “Les Musiciens du Monde” with base in Tunis, Tunisia.

In 1999, he continues touring as a solist, but also concertizes with such musicians as Zoltan Lantos, Ramesh Shotham and Urna Chahar Tugchi. He also dedicates 1999/2000 to the completion of his opera “John Donne”, which hinders more extensive concertizing. Chris Jarrett tours in Poland, Germany, Yugoslavia and France in 2001/2002, but dedicates himself to the foundation of the Chris Jarrett Trio as well. Along with such musicians as W. Dauner and D. R. Davies, the trio concertizes for the opening of the Theaterhaus Stuttgart in April, 2003.

His music derives from an urge to communicate. The music is as diverse as his ideas, which he transforms into music. He ignores any dictates of style. Chris Jarrett utilizes the structures of classical music and the freedom of jazz improvisation. He combines the love for forms of development with jazz energy. The spectrum of his expression is wide: wild, rhythmical, ironic, epic, melancholic, bizarre, mystical and jazzy. He has been inpired by diverse musical styles from different times and composers. Great influences to be heard in his music come from Johannes Ockeghem, Sergej Prokofiev, Charles Mingus and Frank Zappa.