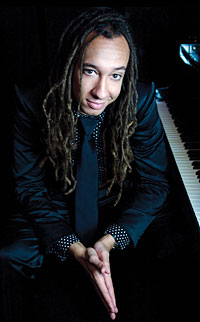 (Prelude)
A quarter of the age of Jazz, Gerald Clayton stakes his claim in the history and the present of this vital music with the following words, “Tradition and innovation can peacefully coexist.”  In libraries and on drawing-boards around the country this statement might be true, but with Gerald behind the piano this coexistence is anything but peaceful.

His dynamic and award-winning sound has been praised in print by the Jazz Times and Los Angeles Times. The New York Times has saluted his “Oscar-Peterson like style” and “huge, authoritative presence” and Down Beat Magazine’s 2008 Readers’ Poll named him one of the top up-and-coming pianists to watch.  As a composer, his work has been commissioned by the Jazz Gallery in New York City and performed overseas by the BBC Orchestra.  He has been honored with a Level 1 award by the National Foundation for the Advancement of the Arts (NFAA), the title “Presidential Scholar in the Arts,” and second place in the Thelonious Monk Institute Jazz Piano Competition.  Dodging early pressures to emerge as a prodigy, Gerald instead honed his talents and his resolve to ensure that this next generation is never lacking for intricate, swinging pieces and performances that are steeped in tradition while always facing the future.

(Theme)
Born in the Netherlands in 1984, Gerald grew up mainly in Los Angeles with a musical family that includes his father, bassist/composer John Clayton, and uncle, saxophonist Jeff Clayton.  At the age of six Gerald began eleven years study of classical piano with Linda Buck before enrolling in the Jazz Studies program at the University of Southern California.  In college in Los Angeles and a year at the Manhattan School of Music, Gerald studied piano and composition under Shelly Berg, Billy Childs, and Kenny Barron.

(Bridge)
Professionally, Gerald has had the honor of performing nationally and internationally with some of the most established names in Jazz such as Lewis Nash, Al Foster, Terrell Stafford and Clark Terry. Duo piano concerts with Gerald have featured artists as celebrated and diverse as Hank Jones, Benny Green, Kenny Barron, Mulgrew Miller and Tamir Hendelman.  Gerald also relishes playing with Jazz’s next generation of innovators: Ambrose Akinmusire, Dayna Stephens, Kendrick Scott and many others.

From 2006-2008, Gerald toured extensively with Roy Hargrove in his quintet, big band, and funk group and he is currently a member of the Clayton Brothers Quintet.  He can be heard on the Clayton Brothers’ latest release, “Brother to Brother,” as well as Hargrove’s 2008 “Earfood,” and Diana Krall’s “From This Moment On.”

(Variations)
But it is Gerald’s own trio, based in New York City and comprised of Justin Brown (drums) and Joe Sanders (bass) that provides him the most direct opportunity to explore and expand his own thoughts in music.  Following upon their touring in Europe and the U.S., where they were praised for balancing a “deconstructivist aesthetic” with “a stronghold on the swing factor,” Gerald and his trio are set to release their debut album, “Two Shade,” this year on Emarcy.

Gerald relishes a sense of open-mindedness: “I have listened to lots of different musical styles as long as I can remember. I continue to absorb all these influences and in doing so create my own voice—by combining their forces into a harmonic whole…I seek to blend the various styles and sounds I love into a balanced, tasteful musical language.”