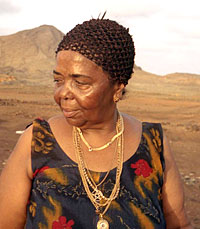 Singer Cesaria Evora is considered to be the queen of mornas and coladeras, which form the basis of traditional music on Cape Verde. These forms are used to convey the hard life of poverty, being separated from a loved one, and also convey a certain nostalgia for the hardships of the past.

Born in 1941, Cesaria Evora spent decades singing in the fish restaurants in the port town of Mindelo on the Cap Verde island of Sao Vicente. Her global career got off to a late start. She had her recording debut in 1985 in France. Her international breakthrough came with her fourth album “Miss Perfumado”.

In 2004 she won a Grammy for her release “Voz D’Amour”. With a smoky voice, Cesaria Evorasings the mournful mornas, which has been compared to the blues and to Portugese fado. Evora has been singing these sad and bittersweet ballads of heartbreak since she was 16 years old. Her emotional intensity has won her comparisons with Billie Holiday, Edith Piaf and Amalia Rodriguez.

Evora comes from a family long steeped in mornas. Her father was violinist and her uncle was a composer. Evora made some of his works such as “Miss Perfumado” and “Mar Azul” well-known around the world.

On her latest, superb album called “&”, she performs duets with musical partners such as Salif Keita, Caetano Veloso and Marisa Monte. After overcoming some recent health problems, Cesaria Evora is once again touring important venues around the world, entertaining her fans while winning over new ones.