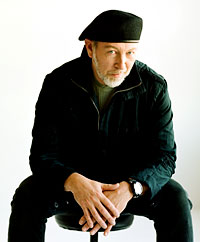 Since the 1960’s, London-born Richard Thompson has established a reputation as a prolific songwriter, virtuoso guitarist, and musical adventurer. Thompson’s career began in 1966, when he left school to co-found the pioneering folk-rock band Fairport Convention.

After departing the band in 1971, he recorded five records with his then-wife, Linda Thompson, including the critically acclaimed masterpiece Shoot Out The Lights. Since the dissolution of their personal and professional relationship in 1982, Thompson has gone on to a solo career that has resulted in more than 30 records, numerous film and television scores, and over 400 songs. Selections from his vast catalog have been recorded by Elvis Costello, Robert Plant, Los Lobos, Bonnie Raitt, Alison Krauss, the Blind Boys of Alabama, and countless others, and have earned him an Ivor Novello Award for songwriting.

As a guitar player, Thompson is a musician’s musician. Equally at home with electric or acoustic instruments, his distinctive style incorporates a wide range of influences, from traditional British and Celtic feels to jazz, rockabilly, and more. He has been recognized with the Orville H Gibson Best Acoustic Guitarist Award, the MOJO Les Paul Award, and a spot on Rolling Stone Magazine’s Top 20 Guitarists of All Time list.

In 2010 he served as curator of London’s Meltdown Festival at the South Bank Centre. 2011 saw him named an Officer of the Order of the British Empire (OBE), and a recipient of a Doctorate Honoris Causa from the University of Aberdeen. Musical activity over the last several years includes the release of a comprehensive career retrospective box set entitled “Walking on a Wire”, the Grammy-nominated “Dream Attic” by the Richard Thompson Band, and performances of an ambitious theatrical song cycle entitled “Cabaret of Souls”, written for string orchestra and rhythm section.

“The OBE will further restore Richard Thompson’s status at the top table of British musical heroes as a folk revolutionary, one of the world’s greatest guitarists, a must-­see performer and one of the finest songwriters this country has ever produced.”
Spectator