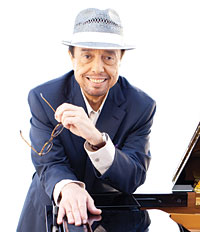 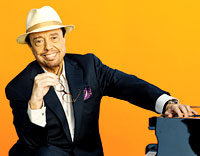 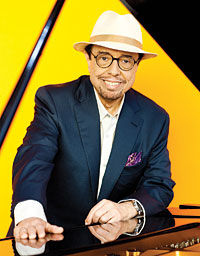 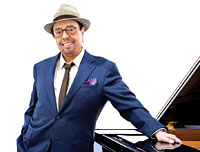 Sergio Mendes was born in 1941 in the village of Niteroi on the bay of Rio de Janeiro. He has become the most important purveyor of bossa nova (“new wave”). He began playing the piano at the age of six. Interested in jazz, at the age of 16 he strated his first band.

Soon bossa nova began to spread around the globe, thanks in large part to Sergio Mendes. In 1962 he went to New York to perform at a legendary bossa nova festival at Carnegie Hall. Mendes soon moved to the US.

At first, the “Swinger from Rio” worked with Cannonball Adderly. In 1964 he went to California to launch a commercial career. After he signed with Herb Alpert and Jerry Moss at A&M records he began a global career in jet-set pop. This was a time of hit songs and gold and platinum records, performances around the world and superb TV specials with stars such as Bob Hope, Frank Sinatra, Danny Kaye, Fred Astaire and Jerry Lewis.

In 1968 he took bossa nova to Japan and Asia where his popularity was only surpassed by the Beatles. In 1993 he won his first Grammy award. His 2006 comeback album was called “Timeless” and proved that he was still a master on the piano on duets with hip-hop and R & B stars such as Will.I.Am.

Mendes’ last album, “Encanto”, again featured many guests from pop and rap had more of a Brazilian feel, while his current opus, “Born Tempo” is again heavy with hip-hop beats. On the album the master interprets in a modern way compositions from Milton Nascimento, Jorge Ben and Antonio Carlos Jobim. 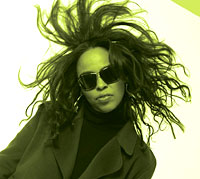 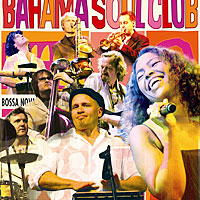 It has often been said that Germans are not exactly agile on the dance floor. Oliver Belz’s passion is to refute this incorrect stereotype. He did so with his colleagues Sammy Kilic and Ralf Zitzmann and their JuJu Orchestra.

In 2008, Belz founded his new group, the famous Bahama Soul Club, which has proven to be a veritable groove machine. His new album, “Bossa Nova Just Smells Funky”, is exactly what one would expect from him: club music which can also be played during the daytime. Dancing is praying with the legs, something which becomes apparent with the Bahama Soul Club’s opening number, “King’s Wig”.

“Bossa Nova Just Smells Funky” features numerous illustrious guests. These included Pat Appleton from DePhazz, Xantone’ Blacq from Amy Winehouse’s band, John Turrell from Smoove & Turrell, and Vienna’s Bella Wagner. Miss Wagner became infamous for songing vocal on Falco’s final opus “Out Of The Dark”. Last year she had her soul debut at the Montreux Jazz Festival. This year she is also a part of the Bahama Soul Club. Her smokey voice defines the sophisticated number “Experience in Jazz”. The sensitivity of his retro sound is nothing less than explosive. 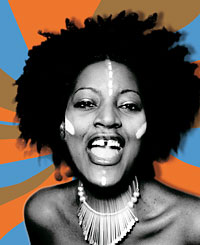 Brazilian music has a long tradition of reaching out to popular music. Musicians such as Seu Jorge, Cibelle and Bebel Gilberto often work abroad where they integrate electronic elements into their music. This can also be said of Marina Da Cruz.

Her sound, which mixes of bossa nova, funk, electro and samba rock, is made in Switzerland. She has followed up her critically-acclaimed debut album “Nova Estacao” with the group Da Cruz and their latest release, “Corpo Eletrico”. She is more interested in urban and progressive sounds than in perpetuating romantic clichés.

Her music has typical Brazilian elements as well as poetic lyrics, bittersweet melancholy, and polyrhythmic vitality. The group goes beyond the conventional Brazilian electro sound with timeless songwriting.