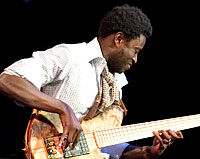 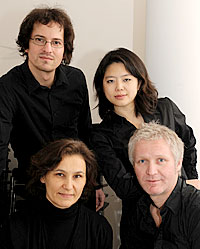 Joe Zawinul (1932-2007) was known for a restlessness and single-mindedness which had already exhibited itself in early childhood. Zawinul was a virtuoso on the accordion, piano and synthesizer. He was influenced by folk music, especially those of Slavic or Sinti origin. He first encountered jazz in 1944, an event which guided the rest of his life. He never gave up on his desire to play with black American jazz musicians. He achieved early musical success with the Austrian All-Stars, Roland Kovac, Fatty George, and a brief stint with Hans Koller.

In 1959, the young Zawinul sailed to the United States from France with 800 dollars in his pocket and a scholarship to the Berklee School of Music in Boston. He quit school after two weeks to become a free-lance musician. He was a sideman for Maynard Ferguson, Dinah Washington, Joe Williams, Cannonball Adderly, Yuseef Lateef, Ben Webster, J.J. Johnson, Slide Hampton, Ella Fitzgerald, and Miles Davis.

Zawinul lived in Harlem and Brooklyn. He soon began composing. His compositions for Cannonball Adderly became global hits: “Mery, Mercy, Mercy”, “Walk Tall”, “74 Miles” and “Country Preacher” and became standards for the Soul-Jazz genre. Then came the first solo albums such as “Money in the Pocket”, which were in the Blue Note Records vein. This was followed by more experimental offerings such as “The Rise and the Fall of the Third Stream”.

Zawinul then teamed up with Miles Davis to compose and perform on the legendary numbers “In a Silent Way”, “Bitches Brew”, and “Big Fun”. The harmonies and rhythms soon became more abstract; post-production was introduced. This led to genre fusion and the co-founding of Weather Report in 1971 with saxophonist Wayne Shorter. This formation helped put Zawinul on the Mount Olympus of jazz greats. Weather Report released albums such “I Sing the Body Electric”, “Sweetnighter”, “Black market” and “Time Passage”. There were also hit tunes like “Birdland” , which made Zawinul immortal.

In addition to his other accomplishments, Zawinul was also a key element in the establishment of three new musical genres: soul jazz, electric jazz, and world music-jazz. He engaged such brilliant musicians as Salif Keita and Richard Bona.

Now is the time to pay homage to this great master. The radio.string.quartet.vienna will do so on this evening with select works. Also appearing will be The Syndicate, Zawinul’s last band which so powerfully embodies his spirit of world music, funk and jazz.

Joe Zawinul – one of the most legendary, visionary and influential musicians and bandleaders that jazz ever produced. His passing in the fall of 2007 left a big, gaping hole in the musical world that can never be filled. But if anybody could, it would be The Syndicate – the band that he chose as the vehicle for his innovative and genre-busting musical styles after the break-up of Weather Report in the mid 80ties.

Joe Zawinul had a true midas touch in picking his band-members, not only picked because of their virtuoso instrumental skills, but with a special ear for how, ultimately, each musician would contribute to a whole that was totally unique to Joe Zawinuls vision. The Syndicate has decided to keep the band together, and continue and expand on the vision that Joe Zawinul laid out.

Electrifying rhythms, the freedom of jazz, and the multicultural diversityof Vienna: Joe Zawinul and radio.string.quartet.vienna have several thingsin common. When the famous Viennese sound-wizard died in 2007, the exploring pioneering string formation had just launched its successful debut: “Celebrating the Mahavishnu Orchestra” – an equally groovy and inspired reinterpretation of a jazz-rock classic from the 70s. radio.string.quaret.vienna felt a strong spiritual kinship with this man, who – as well as Miles Davis and Wayne Shorter – decisively advanced the fusion of rock dynamics with jazzy ingenuity. He also enriched his sound with folk music and new polyrhythmic tonicity; essentials with which also „r.s.q.v.“ is continuously extending the spheres of classical string quartet playing – as witnessed so far by three albums and celebrated concerts worldwide.

The Concert-Special “Zawinul Report” pays homage to arguably the most influential European jazz musician, whose 80th birthday in 2012 will be marked by various contributions. Also, the program is yet another step for Bernie Mallinger (Violine), Asja Valcic (Cello), Cynthia Liao (Viola) and Igmar Jenner (Violin), in their endeavour to translate the spirit of fusion music into our times. The immortal ballad “In A Silent Way”, written for Miles Davis by Zawinul, forms a permanent feature in the group’s live-repertoire. This will now be joined by tracks from the “Weather Report”-era, the style-defining super group of jazz-rock (“Birdland”, “Black Market”). Bernie Mallinger: „Zawinul has written groundbreaking compositions and charmed these unbelievable grooves out of his keyboard. We thought it tremendously appealing to transfer this to string quartet.“