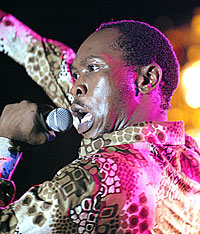 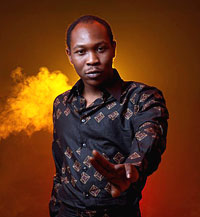 Born in 1982, Seun Kuti is the youngest son of the legendary Fela Kuti and has adopted his father’s commitment to Afro-Beat. He has been a longtime member of his father’s last band, Egypt 80, which he joined when he was just eight years old.

A hot brass section, sensitive singers, funky guitarists and wild percussionists talk listeners straight into the heart of Africa. Seun himself plays alto sax, dances ecstatically, play keyboards, and, primarily, has an amazingly soulful voice. Like his father, his music attacks corruption, injustice, and loss of dignity. His stage presence is electrifying alongside his more staid American colleagues.

His 2008 debut won raves for tracks such as “Fire Dance”, “Mosquito Song”, and the title track “Many Things”. His latest work was produced by Brian Eno and features sure-to-be-hits such as “African soldier” and “the Good Leaf”. With vitality his music unites soulfulness and radical politics.