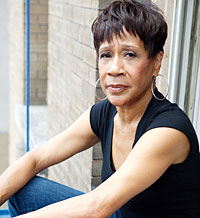 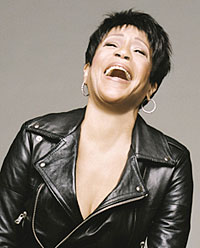 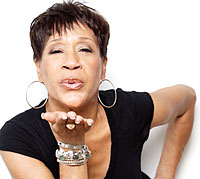 Bettye LaVette’s career got off to a perfect start when she was only 16. The soul singer born Betty Haskin recorded her debut single “My Man, He’s a Loving Man” for Atlantic Records in 1962.

She went on to record such classics as “Let Me Down Easy” for smaller labels. Years before Janis Joplin she sang the Jerry Ragavoy song “Piece of My Heart” and recorded soul gems such as “Games People Play” and “Your Time to Cry”.

In the disco era she released songs such as “Doin’ the Best I Can”. She then sang is musicals such as “Bubbling Brown Sugar”, In 2005, she soared back to the center of the pop music scene with the album “I’ve Got My Own Hell To Raise”. Since then she has stayed on this musical course and last year brought out her interpretation of works from the British rock songbook.

Much in the world has changed since the original version of the Blind Boys of Alabama first raised their voices together. That was in 1939, when the members were just kids at the Alabama Institute for the Negro Blind in Talladega, Ala. Today, more than 70 years later, founding member Jimmy Carter can look back on a career far beyond what he and his colleagues could imagine at that time.

The group has won a long list of awards, including Lifetime Achievement honors from the Grammys and the National Endowment for the Arts, entertained around the world, been profiled on 60 Minutes, sung for two Presidents at the White House and been inducted into the Gospel Music Hall of Fame.

Yet throughout this long adventure, they kept one secret to themselves.

“All my life, I’ve loved country music,” confesses Carter. “I was raised up around it. Back in the 1940s, I remember listening to Hank Williams and so many others. Their voices were great. The writers were great. And every song had a meaning. I still have loads of country music in my home and I play it all the time. As a matter fact, I’ve got it on XM radio as we speak.”

Though the group has recorded and performed with a few country artists, along with others as diverse as Ben Harper, Tom Petty, Peter Gabriel and Prince, they never crossed the line and committed to doing a project inspired by the country genre until now, with the release of Take The High Road on Saguaro Road Records. This landmark recording draws from modern and traditional country to enrich the group’s gospel-rooted sound with fresh and illuminating insight.

For years the Blind Boys had imagined such a project. But it wasn’t until they were voted into the Alabama Music Hall of Fame in 2010 that their plans began to coalesce. The catalyst was their meeting rising country music star Jamey Johnson, who sang “Down by the Riverside” with them at the induction ceremony in Montgomery. Johnson, whose gifts as a songwriter and performer match his fierce commitment to country music’s history and tradition, is a longtime admirer of the Blind Boys. The experience of sharing the stage with him prompted the Blind Boys to seek his services to help bring their dream of doing a country gospel album to life.

They proved a perfect match. “The Blind Boys attract intense, artistically pure people like Jamey,” says Chris Goldsmith, their producer or executive producer on every album since 2001. (On Take The High Road, Goldsmith is a co-producer along with Johnson and Nashville musicians Chad Cromwell and Kevin “Swine” Grantt.) “Jamey is uncompromising and passionate, and an encyclopedia of music. He became the keeper of the flame on this project.”

That meant, first of all, making sure that every song they chose to cut connected with everyone involved. “On other albums, the Blind Boys might be hesitant to try a new song and I would have to make an effort to convince them that the song would be a good one to do,” Goldsmith said. ”But for this one, we sat in the control room, playing demos or old recordings of certain songs. Jamey would watch the guys, and if they started bobbing their head and tapping their foot, then we would do that one. We’d never done it like that before, and it was a lot of fun.”

Johnson was pivotal as well in lining up many of Nashville’s top country singers and A-list musicians for the sessions. All it took was a personal call to bring Vince Gill, Willie Nelson, the Oak Ridge Boys, Hank Williams Jr. and Lee Ann Womack onboard. Each of these guests brought a distinctive perspective into the mix, but according to Carter, aside from being icons of country music, they all had one thing in common.

“When we bring people in to our projects, we look for those that have some soul in their singing,” he notes. “All these folks, they bring soul. That’s why it sounds so good. That’s what it’s all about.”

There was no pre-production or rehearsal for Take The High Road. “Every song found its guest, and every guest found the center of that song,” Goldsmith said. “Lee Ann, Vince, Hank, Jamey – everybody just crushed it.”

For Carter, recording in Nashville for the first time in his career was another longtime dream finally coming true. Johnson set that ball rolling with a personal tour of legendary Music City hotspots. “I told Jamey, ‘I heard about this bar in Nashville but I thought it was a legend. Is there a Tootsies in Nashville?’ He said, ‘Yes, there is. Would you like to go?’ I said, ‘I sure would.’ I wound up onstage there, singing. That was a great, great moment in my life. And later Jamey took me to the Station Inn, where I sang along with Vince Gill and the Time Jumpers. That was the first time I ever met him.”

Johnson also invited some of the city’s musical royalty, including “Whispering” Bill Anderson and the king of country singers, George Jones, just to stop by and witness the sessions. They bonded quickly with Carter and the Blind Boys, and the word got out that something special and historic was happening at the old RCA studio.

The musicians recruited by Johnson were equally touched by the opportunity to record with the Blind Boys. Each is a seasoned professional, yet the intensity of working for the first time with the group went beyond normal routine. Fiddler and mandolin player Glen Duncan bluntly stated “I’ve been recording music my entire adult life, and working with The Blind Boys of Alabama on this record was the most moving experience of my life and career.” The celebrated guitarist Reggie Young shed tears during an especially emotional moment of music. Johnson confirmed to the New York Times that “there wasn’t one person who didn’t bawl like a baby or bust their heart open at least once” during the sessions. And bassist Kevin “Swine” Grantt was so moved during the tracking of his own tune, “I Know a Place,” that he had to leave the studio and spend an hour collecting himself before he could continue.

That track is but one of many highlights on Take The High Road. The hypnotic, waltz-time sway and Jamey Johnson’s rough-hewn and reverent vocal on “Have Thine Own Way, Lord,” the timbres of Willie Nelson’s hushed singing and acoustic guitar on “Family Bible,” the Hank Jr romp through his father’s “I Saw the Light” – each performance reveals a different perspective on faith, woven into one testimony and uplifted by the Blind Boys’ embrace.

The singers mirrored this deep feeling as they laid their unmistakable, church-inflected harmonies over beds of fiddle and steel guitar. The result isn’t just an album that explores the juncture of two great forms of American music; it’s an achievement that stands out even in the Blind Boys’ storied catalog as a demonstration of how divinely inspired music can transcend the borders of category.

“Out of all the records we’ve done together, this has been the most natural,” Goldsmith insists. “The connection between the material, the Nashville guests, and the Blind Boys felt like destiny. Somewhere in history, these two almost identical styles of music – country and gospel – went their separate ways. This record brings them back together.”

Carter puts it this way: “These two traditions are very similar. There’s a lot of common ground in all kinds of music, and it keeps getting closer and closer together. That’s why we want to involve everybody in our music. We want to sing good music, no matter what kind it is. Most of all, we want to touch people’s lives. We want to leave them a message they can feed upon throughout their lives.”