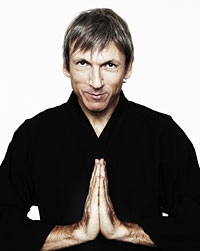 For over a decade Magnus Öström was the drummer in the trio e.s.t., one of the most impressive ensembles of the European jazz scene. The group only came to an end with the tragic and unexpected death of pianist Esbjörn Svennson.

Öström’s vital contributions to e.s.t. have also been captured on his excellent solo album “Thread of Life”, recorded at Stockholm’s legendary Atlantis Studio (ABBA!) with sound engineer Janne Hannson. The album is convincing through its sheer sonic variety and depth, which features sampled vocals, spherical keyboarding, and polyrhythmic imprints.

Öström, who has worked with jazz greats such as Roy Hargrove, Pat Metheny and Bobo Stenson, developed his own unique style early under the influence of rock and jazz-rock. In addition to his many talents as an instrumentalist, he has also proven himself to be and original arranger and accomplished composer.