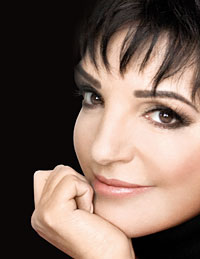 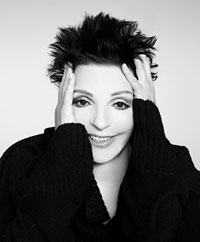 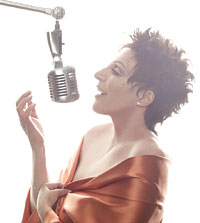 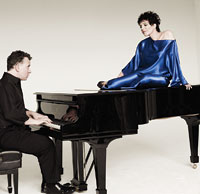 What she lacks in vocal versatility, Liza Minnelli makes up with in verve and charisma. The daughter of Judy Garland and Vincente Minnelli (her godfather was lyricist Ira Gershwin) has a genetic heritage in show biz going back six generations.

In 1949, she debuted at the age of three in the musical “In the Good Old Summertime”. At 17, she appeared in off-Broadway productions. At 18, she performed with her mother on the stage of London’s Palladium, and one year later she was on Broadway. She debuted as a singer in Washington, D.C., and in 1964 she recorded her first album, “Liza, Liza”.

She worked intensely with songwriters John Kander and Fred Ebb, who wrote many of her trademark tunes. In the early 1970s, she turned to contemporary pop and soul sounds. This led to hits for her such as “Use Me” (written by Bill Withers) and 1977’s “Tropical Nights”.

Her great breakthrough came with her portrayal of Sally Bowles in director Bob Fosse’s “Cabaret”, which earned her an Oscar. Most of the lyrics were penned by Kander and Ebb. As an actress she went on to work with directors such as Otto Preminger and Martin Scorsese. Scorsese directed her in “New York, New York”, which co-starred Robert De Niro as a jazz saxophonist. The title of the film was also a famous number for Frank Sinatra.

Liza went on to tour with Sinatra and also collaborated musically with the Pet Shop Boys, Brian May, Donna Summer, and her good friend Michael Jackson. The two appeared together at Madison Square Garden in 2001. Liza Minnelli She made a comeback album last year called “Confessions” and was backed up by pianist Billy Stritch and his band. The album features Liza’s vocals on songs originally made famous by Peggy Lee, Ray Noble, Cy Coleman and Irving Berlin.