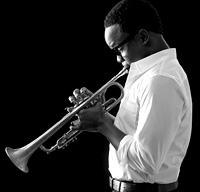 Born and raised in Oakland, California, it was as a member of the Berkeley High School Jazz Ensemble that Ambrose Akinmusire (pronounced ah-kin-MOO-sir-ee) first caught the attention of a discerning ear. Saxophonist Steve Coleman was visiting the school to give a workshop and immediately heard promise in the young trumpeter, eventually hiring him as a member of his Five Elements band and embarking on an extensive European tour when Akinmusire was just 19.

The experience proved life-changing. Coleman—considered by many to be the spiritual godfather of the current creative jazz scene—challenged Akinmusire on and off the stage. “Ambrose, what’s your concept?” Akinmusire remembers Coleman asking him on a train ride through Germany. “Concept? I’m 19, I don’t need a concept. It’ll just come one day,” shrugged Akinmusire, raising the saxophonist’s ire. “He really laid in on me. I’ll never forget it,” he recalls. “You’ve got to start thinking about it now,” Coleman told him. “Everything you don’t love, make sure that’s not in your playing.”

Akinmusire took the advice to heart, and returned to his studies at the Manhattan School of Music determined to discover his own voice. “When I got back to school I wrote a list,” he explains. “It was very specific, it had things on it like ‘I don’t want to be confined by my instrument’ or ‘I want to have a sound like a French Horn player.’ It had harmonic concepts on it. I posted it on my wall so every day I was reminded of it. It caused me a lot of trouble because if a teacher told me to do something and it didn’t really fit what was on that list I didn’t listen to them. It really made me learn who I was because I had to defend that every day.”

After returning to the West Coast to pursue a master’s degree at the University of Southern California, Akinmusire went on to attend the Thelonious Monk Institute of Jazz in Los Angeles, an experience that began to bring his quest into clearer focus. “I went from being the oddball to being surrounded by people who were just like me and having teachers that were stressing [individuality] like Terence [Blanchard], Herbie [Hancock], and Wayne [Shorter]. I learned a lot from Terence. He really got me to be 100% comfortable in the things I was hearing in my head. After the Monk Institute it was just me going for my own sound and my own concept.”

2007 was a pivotal year for Akinmusire. He entered and won the prestigious Thelonious Monk International Jazz Competition from a panel of judges that included Blanchard, Quincy Jones, Herb Alpert, Hugh Masekela, Clark Terry and Roy Hargrove. That year he also won the Carmine Caruso International Jazz Trumpet Solo Competition and released his debut recording Prelude…To Cora on the Fresh Sound New Talent label. He moved back to New York City and began performing with the likes of Vijay Iyer, Aaron Parks, Esperanza Spalding, and Jason Moran, taking part in Moran’s innovative multimedia concert event In My Mind: Monk At Town Hall, 1957. It was also during this time that he first caught the attention of another discerning set of ears, those of Bruce Lundvall, President of Blue Note Records.

“I’ve been following Ambrose for a while, and I believe he is the kind of musician that jazz needs more of,” states Lundvall. “He’s finding a very distinctive voice on his instrument, has a fantastic sense of adventure, and is dedicated to pushing the music forward.”
Lundvall signed Akinmusire, and in September 2010 the trumpeter brought his quintet into Brooklyn Studios to begin recording. Bringing Moran on board as co-producer was a natural choice. “Over the years not only has he been a musician and an artist that I’ve looked up to but he’s been one of the most blunt and honest people I’ve ever met in my life, and I just wanted that type of energy in the studio,” explains Akinmusire. “He’s also one of the few musicians that on every record he’s given 100% and that’s what I was striving for. He’s the guy that people of my generation really look up to right now. I think knowing that he was in the control booth made everyone play harder and reach for things that we maybe would not have reached for.”

The album’s opening track “Confessions to My Unborn Daughter” immediately establishes several of the quintet’s hallmarks including their striking juxtaposition of bombast and beauty, with searing solos turning on a dime to reveal moments of touching tenderness, and the profound frontline interplay between Akinmusire and Smith. The way the two intuitively trade lines back-and-forth, finishing each other’s musical sentences, is surely a result of the 12 years that they’ve been making music together. “He and I never have any musical conversations,” says Akinmusire. “It’s amazing, it feels like he’s part of my brain and I’m part of his. I know exactly what he’s thinking, what note he’s going to end on, when he’s going to play something, when he’s going to stop.” “Confessions” also reveals Akinmusire’s penchant for intriguing song titles, as does the album’s penultimate track “Tear Stained Suicide Manifesto” (which features Moran on piano). The titles are secret clues to elaborate storylines that he constructs as inspiration for his composing process. “I always put the title first before I write one note,” he explains. “I need a whole story to have the format for a composition.”

However, some of Akinmusire’s compositions do have explicit references. “The Walls of Lechuguilla” refers to the extensive cave system in New Mexico known for the rarity and unusual beauty of its geological formations. “Every day I practice in front of a documentary because I do long tone for an hour and a half and I have to have something in front of me. This time I was checking out the Planet Earth series on BBC and they went down into this cave that nobody had ever gone into. They shine the light on the walls, and it was the most beautiful thing I had ever seen in my life, and so I immediately started writing that tune and it came out just like that from beginning to end.” “My Name Is Oscar” is a powerful piece that features Akinmusire’s spoken voice backed solely by Brown’s relentless drums. Oscar is Oscar Grant, the unarmed 22-year-old African American man who was shot and killed by a transit officer on New Year’s Eve in 2009 in Akinmusire’s hometown of Oakland. “I just want people to know the story. I don’t want it to become this ‘f*ck the police’ anthem,’” he says. “Every time I go back home I’m reminded of it, people still talk about it, it’s still such a big thing because he got off with just two years, he didn’t get charged with murder. It just really resonates with me because I feel like it could have been me or anyone. The piece begins with me observing what happens, then me talking in the voice of Oscar Grant himself.”
“Ayneh (Cora)” and “Ayneh (Campbell)” are two delicate interludes that are dedicated to Akinmusire’s mother. “’Ayneh’ in Farsi means ‘mirror’ but more related to ‘reflection’ and I just wanted to write a piece that felt like an exhale, it’s a relaxing thing,” he says. “Then I flipped the song around, so the first bar I wrote is the last bar, so I flipped the title around and called it ‘Henya,’” which coincidentally in the Hebrew language is a name that translates as “Grace of God.”

As for “What’s New?” it isn’t meant to be entirely ironic, Akinmusire says. “Clifford Brown is one of my favorite trumpet players, and his version of that is just so amazing. So it was sort of a tribute to him, but also just in case you’re doubting that I have any type of tradition, there’s this.”
“When The Heart Emerges Glistening refers to being present, emotionally invested, honest—not exclusively in our art, but in every act of expression,” Akinmusire says in explaining the album’s title. “It’s about parting our chests to reveal ourselves to one another and to ourselves, to reflect honestly the ‘everything’ of us—the ugly, the changing, the vulnerable, the fierce, the solid, the safe. The heart ‘glistens’ because it is wet, it is fresh. With every act of expression, it is a newly excavated heart, so that through listening closely, we are ultimately chronicling every present moment, and constantly re-examining our changing selves. In bearing ourselves this way, we connect more deeply with one another. The many sides of the album itself are a testament to our complexity and uniqueness as individuals, and the imperative to bare and explore honestly every coexisting side of us.”