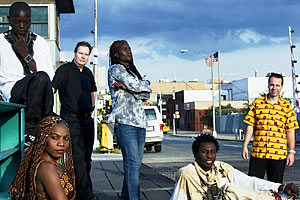 Hailed by the New York Times as an “irresistible brew of West African music and electronica,” Burkina Electric is the first electronic music group from Burkina Faso, in the deep interior of West Africa. Based in Ouagadougou, Burkina Faso’s capital, it is, at the same time, an international band, with members living in New York, U.S.A. as well as Ouaga.

Burkina Electric’s music combines the traditions and rhythms of Burkina Faso with contemporary electronic dance culture, making it a trailblazer in electronic world music. A diverse and talented group consisting of three musicians and two dancers, they collectively participate in the creative process and represent disparate musical genres and sounds from across the globe.

Rather than recycling well-known rock and funk rhythms, Burkina Electric seeks to enrich the fabric of electronic dance music by using unusual rhythms that are rarely heard and little-known even in much of Africa. This includes ancient rhythms of the Sahel, such as the Mossi peoples’ Ouaraba and Ouenega, but also new grooves of their own creation. The band invites you to discover these exotic rhythms groove at least as powerfully as disco, house, or drum & bass!

The group creates a unique and refreshing musical world that is all their own by incorporating sounds of traditional instruments and found sounds recorded in Burkina Faso. It is truly African electronica, an exploration and fusion of musical styles both experimental and entertaining.

Award-winning singer Maï Lingani, a star in Burkina Faso because of her unique voice and charismatic stage presence, sings in Moré, Dioula, Bissa, and French. Wende K. Blass, one of Burkina’s premier guitarists, contributes soulful guitar melodies. New York-based drummer/electronicist Lukas Ligeti is one of the most up-and-coming concert music composers internationally. Known for his nonconformity, diverse interests, and imagination, he has received commissions from prominent groups such as the Kronos Quartet, the Bang on a Can All Stars, and the American Composers Orchestra. Vicky and Zoko Zoko are skilled dancers/choreographers who bring high energy and sharp moves, and also contribute powerful vocals.