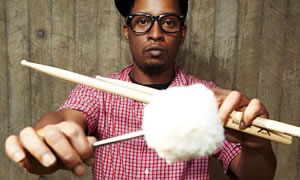 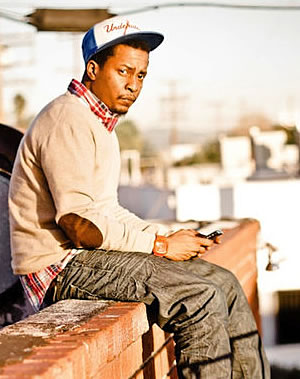 Born in Houston, Texas, drummer Chris Dave, also known as Chris “Daddy” Dave, began his music career in the late 1980s. Chris Dave is one of the most revered and in demand musicians of his generation. His eccentric approach to the drum set and his ability to adapt to any musical setting, whether jazz, hip-hop or R&B, has put him in a category of his own.

Chris Dave got his start, like many musicians, playing in church. Although gospel music was an important facilitator of Chris Dave’s early style development, he credits jazz music as his strongest influence. As a teenager, he was exposed to jazz legends like Miles and Coltrane when listening to music with his father. Chris Dave blossomed on the drums, eventually graduating from Houston’s prestigious High School for the Performing and Visual Arts.

He studied at Howard University in Washington D.C. where he met acclaimed producers and former Prince associates Jimmy Jam and Terry Lewis. Through this relationship, Chris Dave began working with R&B band Mint Condition and the rest as they say, is history.

As the 1990s came to an end and the 2000s began, Chris Dave’s assent as one of the greatest drummers in the world began to take shape. His open interpretations of rhythm and his ability to conform to each musical setting differently led to many new opportunities and platforms for Chris Dave to show his evolution to the world. Recent projects include his contribution as the featured drummer on Adele’s Grammy nominated album 21 and Maxwell’s Grammy winning album BLACKsummers’night.

Many of the world’s touted geniuses and great thinkers have experienced a time when their work and ideas flourished. For Chris Dave, that time is now. With the proven track record that spans over a variety of genres, the 90s to the present mark a time where Chris Dave has redefined the role of the modern drummer. He has taken his unique approach to production, tweaked it and applied it to the drum kit, creating an original sound that no other drummer can claim.

His band Chris Dave & Friends consists of Pino Palladino on bass, Kebbi Williams on sax, Tim Stewart on guitar and Chris Dave on drums. The show takes the audience on a musical journey by playing a variety of genres. Sometimes the band performs covers that are inspired by themes from the likes of Jimi Hendrix, D’Angelo, Fela Kuti, Radiohead, J Dilla and many more. With special surprise guests showing up during performances such as Beyoncé, Mos Def, and Bilal to name a few, Chris Dave & Friends always adds to the energetic movement of the show.