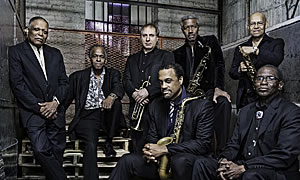 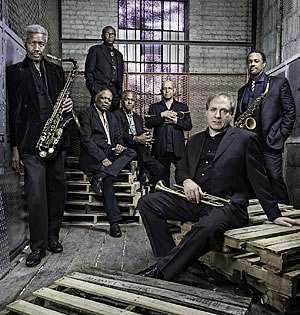 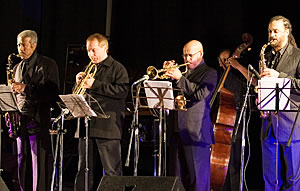 Experience counts,especially in jazz. The more time musicians spend interpreting tunes and interacting with others, the more articulation an audience can expect. You can hear the fruits of such work in the expressive language The Cookers bring to the bandstand and to their two recent critically acclaimed recordings, “Warriors” and “Cast the First Stone.”

This exciting new all-star septet summons up an aggressive mid ‘60s spirit with a potent collection of expansive post-bop originals marked by all the requisite killer instincts and pyrotechnic playing expected of some of the heaviest hitters on the scene today.

Billy Harper, Cecil McBee, George Cables, Eddie Henderson, and Billy Hart all came up in the heady era of the mid ‘60s. It was a period that found the dimensions of hard bop morphing from their original designs, and each of these guys helped facilitate the process as members of some of the most important bands of the era.

David Weiss and Craig Handy, from a more recent generation and the youngest members of the band, are experts in this forthright lingo, having gained experience performing with Bobby Hutcherson, Freddie Hubbard, Charles Tolliver, Roy Haynes and Herbie Hancock.

Each member of the Cookers has spent time leading his own series of groups as well, and each has a keenly individual sound. But it’s the unmistakable power of teamwork that makes this music so commanding and resonates with a kind of depth and beauty that speaks of the seasoned track record of its principals (combined, the group has over 250 years of experience in the jazz world and has been a part of over 1,000 recordings). You can feel the collective weight of that experience in both of their CDs and especially in their live performances.