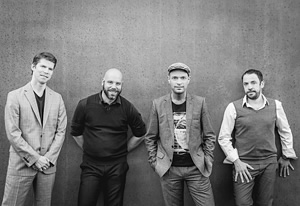 In 2015, Roger Cicero is returning to his musical roots: at small venues this exceptional singer will be presenting English jazz standards, classics and covers in his own unique way. Roger Cicero as many have never heard him!

Following the massive success of the Roger Cicero Jazz Experience concerts in 2013, which were extremely well-received by critics and audiences alike, Roger Cicero is back with his fantastic trio of Matthias Meusel on drums, Herve’ Jeanne on bass, and Maik Schott on piano.

At select jazz festivals and a few shows in small venues, audiences will be able to enjoy this charismatic star when he impressively presents his sounds and songs in a variety of musical colors. Stylish stages with a suave atmosphere will create the background for a unique evening of jazz.

Big Band swing combined with cryptic lyrics in German is what helped establish Roger Cicero as a sought-after musical artist. His debut release, “Männersachen”, came out in 2006. This was followed by four other top-selling albums, over 500 concerts, and innumerable other gigs. Last year, Roger Cicero appeared with Xavier Naidoo, Sasha, Sarah Connor, Gregor Meyle, Andreas Gabalier and Sandra Nasic as part of the popular program “Sing meinen Song – das Tauschkonzert”.