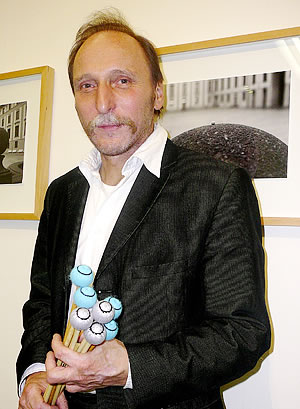 Berndt Luef originally wanted to choose the piano as the instrument he wanted to study. Due to an accident in which he lost two fingers of his left hand this dream dispersed. Nevertheless he wanted to become a musician by all means. He learned how to play the drums and one year later he enrolled at the “Hochschule für Musik und darstellende Kunst” in Graz. His fields were classical music and jazz. After completing the classical studies in 1979 he concentrated on the vibraphone and received his diploma in 1983.

He lives as a freelance artist in Graz. He is a teacher of drums and percussion for many young talents. Moreover, he has been leading the music department in Forum Stadtpark from 1988 to 2006.

Berndt Luef has been composing for several groups. In 1979 he became the drummer of the rockband MIRROR, between 1984 and 1990 he was their bandleader. In 1982 he founded the BERNDT LUEF TRIO (bass, drums and vibraphone), in 1993 the JAZZTETT FORUM GRAZ. The repertory of those two ensembles has been composed almost completely by Berndt Luef. He also regularly writes compositions for the programs of the cabaret group DIE BLAUEN ENGEL.

In 2001 he won the first prize at a compository competition for jazz music with his jazzballad “Eyelash” (from the CD “Deviation”). Due to his concern with the civil war in Ex-Yugoslavia and due to the fact that some members of his groups are from this area he has played a lot of concerts in Bosnia and Serbia.

As a guest musician Berndt Luef works among others with STUDIO PERCUSSION graz and in Tom Rottleuthner’s “Parkorchester”. From 2006 on he has also been acting as a writer in Graz’ wall news-sheet ausreißer.