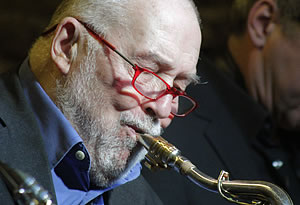 Saxophonist and flutist Heinz von Hermann was born in Vienna in 1936. He studied clarinet under legendary Austrian jazzman Fatty George, and taught himself how to perform on other instruments. In 1958, he won a competition for young musicians in the Club Tabarin which had been organised by Friedrich Gulda.

During a sterling career he has performed with, among others, greats such as Jimmy Woode, Uzi Förster, Peter Herbolzheimer, Lee Konitz and Donald Byrd. Shortly before celebrating his 80th birthday he will be performing swings, blues and jazz in the cozy atmosphere of Jazzland.