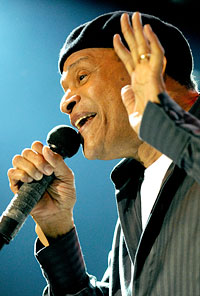 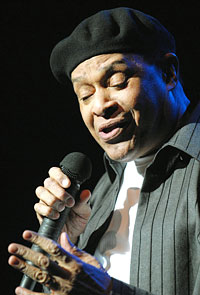 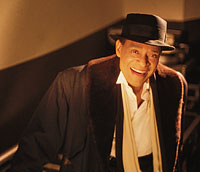 Al Jarreau’s unique vocal style is one of the world’s most precious treasures. His innovative musical expressions have made him one of the most exciting and critically-acclaimed performers of our time with seven Grammy® Awards, scores of international music awards and popular accolades worldwide.

It’s not surprising that he has perfected his technique to such an art. After all, he has been singing since the age of four, harmonizing with his brothers and performing solo at a variety of local events in his hometown of Milwaukee, Wisconsin. Music, however, was not always the major force in his life. He excelled in sports and was an above-average student throughout high school and college. Enrolling at the respected Ripon College in Wisconsin, Jarreau continued singing for fun, performing locally with a group called The Indigos during weekends and holidays, and graduated with a Bachelor of Science degree in Psychology. After moving on to the University of Iowa to earn his Master’s Degree in Vocational Rehabilitation, Jarreau subsequently relocated to San Francisco to begin a career in rehabilitation counseling.

In San Francisco Al’s natural musical gifts began to shape his future. He found himself performing at a small jazz club with a trio headed by George Duke, and by the late 60s, he knew without a doubt that he would make singing his life. Relocating to Los Angeles, he began his apprenticeship in such famed nightspots as Dino’s, the Troubadour and the Bitter End West. Shortly thereafter, he branched out to New York City as well, where he gained national network television exposure with Johnny Carson, Merv Griffin, David Frost and Mike Douglas. Al teamed with guitarist Julio Martinez to “spell” up-and-coming comics John Belushi, Bette Midler, Robert Klein, David Brenner, Jimmie Walker and others at the famed comedy venue, The Improv.

In 1975, following an extended stint at the Bla Bla Cafe in Los Angeles, Warner Bros. Records talent scouts spotted Al and signed him to a recording contract. His debut album for the label, We Got By, was released to unanimous acclaim. It was a reception that spread across the continent and over the Atlantic when Jarreau was awarded a German Grammy for Best New International Soloist that same year. A second German Grammy came his way with the release of his follow-up album, Glow.

Al’s career breakthrough came in 1977 when Warner Brothers Records released Look to the Rainbow, his live double album, which was culled from his first world tour from that same year, and earned the vocalist his first Grammy® for Best Jazz Vocal Performance.

His fourth album, All Fly Home, was released in 1978 to further accolades and a second Grammy® for Best Jazz Vocalist. It was followed by a string of innovative and original offerings, including 1980’s This Time, and the million-selling Breakin’ Away, which brought him a broader audience and two more Grammy® awards for Best Male Pop Vocalist and Best Male Jazz Vocalist.

In 1983 Jarreau was released, followed closely the following year by High Crime. Both albums spawned a string of R&B and pop hits, and further cemented him as an international superstar. Al Jarreau- Live in London, recorded before a SRO crowd at Wembley Arena in 1985, continued to solidify Jarreau’s reputation as a world-class master of both studio and stage.

Following the live album, Jarreau teamed with top producer Nile Rodgers for L is for Lover, which brought some new styles and sounds to the singer’s repertoire. He continued to top the stateside charts in 1987 and became a weekly guest in America’s living rooms singing the Grammy® -nominated theme song for the hit television series Moonlighting.

With hardly time to take a breath, he launched into the recording of the Heart’s Horizon album, which contained the #2 R&B smash “So Good” and earned him another Grammy® nomination, this time for Best R&B Album. After touring the globe for nearly two years, he returned to the studio – this time with Narada Michael Walden – to fashion the sound that would launch him into his third decade of music-making. The result was 1992’s Heaven and Earth for which he received his fifth Grammy® for Best R&B Vocal Performance. With this, Al became one the rare artists to have won Grammies® in the three categories of jazz, pop, and R&B.

In 1994, Tenderness was released. On this Marcus Miller-produced gem, Jarreau is joined by an all-star cast (David Sanborn, Kathleen Battle, Joe Sample, Steve Gadd, to name a few) to bring us a host of wonderfully familiar contemporary compositions as well as revisit a few Jarreau classics.

1996 brought some exciting career challenges. While on a break from touring, Jarreau accepted a three-month stint on Broadway playing the role of the Teen Angel in the hit musical Grease! Other recent acting credits include guest star appearances on Fox’s New York Undercover, NBC’s Touched by an Angel and a national McDonald’s commercial with R&B sensation, Vesta Williams.

In 1999, for the first time, Al Jarreau teamed up with symphony orchestras throughout the U.S. and Europe performing his most popular hits as never heard before as well as some favorites from Broadway and the Classics, which received outstanding review. Al continues to perform symphony shows on a regular basis.

Called “the voice of versatility” by the Chicago Tribune and “one of the world’s greatest natural resources” by the Detroit News, Jarreau added a new chapter to his twenty-five-year recording career with Tomorrow Today (2001), his GRP Records debut.
Al Jarreau received his own Star on the “Hollywood Walk of Fame”, in March 2001, commemorating his status as one of the best singers of his generation.

Al spent the remainder of 2001 touring the United States, Europe and South Africa and working on his next album, All I Got (2002), where he teamed up with Verzion Telecom as a “Champion for Literacy”. This was followed on by the Grammy® nominated Accentuate The Positive (2004) on GRP Records /Universal Music Group.

Al’s 30th year in the music business saw another landmark with the pairing up with his peer the legendary R’n’B guitarist & singer, George Benson, for the album Givin’ It Up. Recorded in Spring of 2006, this record featured many guest artists including Herbie Hancock, Sir Paul McCartney, Jill Scott, Chris Botti and Patti Austin, amongst others musical veterans. Givin’ It Up was released to critical acclaim on October 24, 2006 by Concord Music Group/Monster Music and garnered 3 Grammy® nominations for; Best R&B Vocal Performance by a Duo or Group, for “Breezin’” (nomination only), and two Grammy® wins in 2007 Best Traditional R&B Vocal Performance for “God Bless The Child” feat. Jill Scott, and Best Pop Instrumental for “Mornin’”.

Early in 2008, Al handpicked his favorite romantic tunes spanning three decades for his Love Songs, a 14-track compilation that was released in January 2008 on Rhino/Warner Music Group. He also helped the Playboy Jazz Festival celebrate its 30-year anniversary by headlining a sold-out opening night at the Hollywood Bowl in Los Angeles.

A few months on October 14, 2008, Al released his first-ever Yuletide album, Christmas. The album features his warm and inimitable voice interpreting a dozen holiday classics, including ”The Christmas Song”, “Winter Wonderland” and “Carol Of The Bells”.

Still one of the hardest working men in show business, 2009 saw Al take in a 6-week European spring tour visiting theatres & festivals in Germany, France, Scandinavia, Eastern Europe and N. America. In the middle of all this, Al also found the time to put together ‘The Very Best of Al Jarreau: An Excellent Adventure’. The 16-song collection highlights some of Al’s best-known songs, alongside one new track ‘Excellent Adventure’, which was produced by Richard Nichols and The Randy Watson Experience (Grammy® winning songwriter James Poyser and The Roots drummer Amir “?uestlove” Thompson) – who have also produced songs for Erykah Badu, Al Green and The Roots (amongst other notable artists).

Some of the hits represented include 1976’s Glow (“Rainbow In Your Eyes” one of Al’s first ever charting tunes), 1977’s Look to the Rainbow (“Take Five”), 1980’s This Time (“Spain”, “Never Givin’ Up”), 1981’s Breakin’ Away (“Roof Garden,” “We’re In This Love Together”), 1983’s Jarreau (“Mornin’,” “Boogie Down”), 1984’s High Crime (“After All”), 1988’s Heart’s Horizon (“So Good”) and Accentuate The Positive (“Cold Duck”), along with other gemstones “Moonlighting”, the theme from the hit TV series; Grammy®-winning virtuosic “(Round, Round, Round,) Blue Rondo A La Turk”, and “We Got By” (from Al’s debut album of the same name). After more than 30-years Al Jarreau is undoubtedly one of the greatest performers and innovative vocalists the music world has ever known. Time Magazine called him ‘the greatest jazz singer alive’ and ‘The Very Best Of Al Jarreau: An Excellent Adventure” illustrates perfectly the reason why.

Al continues to tour extensively worldwide, with his sextet and Symphony shows, and is currently in studio working on a new album. 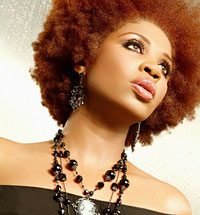 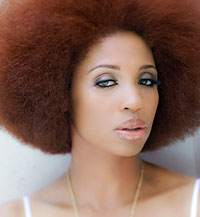 Like many singers, N’dambi (meaning: most beautiful) developed her musical skills by singing and playing piano in her parents’ church in Dallas, TX. Her talents are multi-faceted, incorporating singing, songwriting and producing, as well as writing short stories and novels.

As a student, she became apart of the local artistic community and met another talented singer, Ericka Wright. As Wright soon morphed into Erykah Badu and drew the attention of record executives, the women’s friendship held fast. N’dambi found herself alongside Badu singing backgrounds and co-writing on her first two projects Baduizm and Mama’s Gun, performing on tour and appearing in the videos for “On & On,” “Next Lifetime,” and “Tyrone.”

N’dambi delivered her debut solo cd Little Lost Girl Blues in 1999. Since then she has released the two-disc set Tunin’ Up & Cosignin’ and the 2005 set A Weird Kind of Wonderful, which was released only in Japan. In 2006 she caught the attention of record executives and was signed to the re-activated Stax Records label. Pink Elephant, her debut Stax album was produced by Leon Sylvers (The Whispers, Gladys Knight, Shalamar, etc.) ingeniously distills soul-deep inspiration into a sensual style of elegance and power, making N’dambi a fundamental new addition to the Stax legacy.

Each project has received international recognition resulting in high profile festival and club performances throughout the United States, England, Holland, Switzerland, Belgium, Italy, France, Japan, Tanzania and Uganda. She has also gained the attention of music and fashion editiors of numerous publications and has been featured in Vogue, Essence, Vibe, Harper’s Bazaar and Elle to name a few. 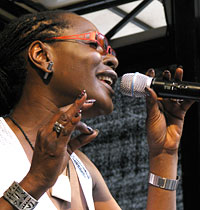 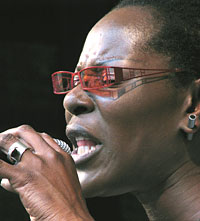 This London-born singer was surrounded by music from an early age, so a singing career seemed like a logical choice. Dorretta Carter worked in variety of musical styles traversing Jazz, Funk and Soul. She performed in variety of bands including the cocktail Jazz combo Working Week, the Afro-Rock group Osibisa and even with Jazz icon Wayne Shorter.

Carter moved to Austria in 1988 where she was soon working in the Austro-Pop scene. She also performed with noted musicians such as Georg Danzer, Boris Bukowski, Hans Thessink and Rainhard Fendrich. At the same time she launched her solo career. On one hand she sang Gospel; on the other she and her band FunkMonsters jammed wildly in the same groove as bands like Mother’s Finest and Wild Cherry. An important musical companion is Paul Urbanek, who took care of the musical arrangements.

In 2006 she drew attention for her fulsome tribute to Black Music icon James Brown. In 2007, she joined forces with guitarist Thomas Lang, bassist Ivan Ruiz and percussionist Eldis La Rosa to form the band Hot Pot for which she also performed her own original songs. Audiences love her not only for the music, but also for her sense of humour and dazzling personaility.