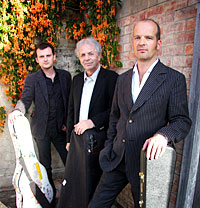 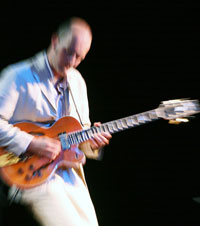 For many years innovative guitarist Wolfgang Muthspiel has been a prize-winning exponent of Austrian artistry. His latest project is a guitar trio with Slava Grigoryan and Ralph Tower. All three virtuosos share a background in classical music. Composition is at the centre of their music. There’s also improvisation, which in their case is more ornamental.

As with his other projects, Muthspiel unfurls a kind of radical musicality which at the same time is not dissonant. He manages to remove all the well-worn patterns and safe moves which are employed by other instrumentalists. This produces an uncanny sense of both tension and excitement. The same can be said for Muthspiel’s method of live sampling in which he creates a quasi-orchestral atmosphere. 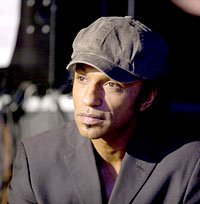 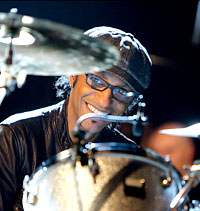 Outstanding drummer Manu Katché was born in 1958 in Saint-Maur-des-Fosses. Raised in Paris, he studied classical percussion. This Master of rythms with westafrican roots was spooted by Peter Gabriel.