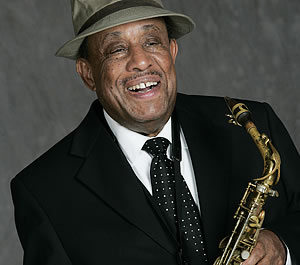 Alto saxophonist Lou Donaldson was born in 1926 in North Carolina and comes from an era when pure musicality was paramount. Influenced by Earl Bostic and Charlie Parker, Donaldson later became famous as a Funk pioneer for his Soul-Jazz melodies. He often performed with organ trios and played with legendary organists such as Dr. Lonnie Smith and Charles Earland.

In 1952 he performed sessions in New York with Dizzy Gillespie, Sonny Stitt and Charlie Parker. On his early recordings he was a sideman for Art Blakey, Jimmy Smith and Thelonious Monk. Donaldson developed his trademark sound at the end of the 1960s. Between 1961 and 1974 he recorded numerous albums for Blue Note, including million sellers, such as his classic “everything I Do Is Funky” and “alligator Boogaloo”.