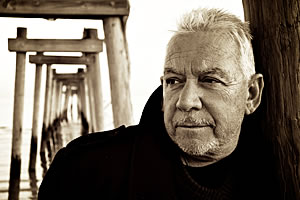 In the Swinging `60s, Eric Burdon and his band The Animals were in the vanguard of the British R&B and Blues scene, along with Them, the Rolling Stones, and the Yardbirds.

Following success with “House of the Rising Sun” and other hits, Burdon disbanded the group and moved to the USA. There he founded Eric Burdon and the New Animals. With producer Tom Wilson, they recorded legendary albums such as “Love Is”, “Winds of Change”, “The Twain Shall Meet”, and “Everyone of Us”. From this period, Burdon’s smoky voice can be heard on ballads such as “San Franciscan Nights”, “Hotel Hell” and “The Immigrant Lad”.

Burdon continued to write music history with two albums he recorded with the African-American band War, and with his extremely successful collaboration with Jimmy Witherspoon.

His current opus is titled “’Til Your River Runs Dry” and is one of his most impressive works in years. He had to cancel his appearance last year because of a back problem, but the legend will be back at this year’s Vienna Jazz Fest.